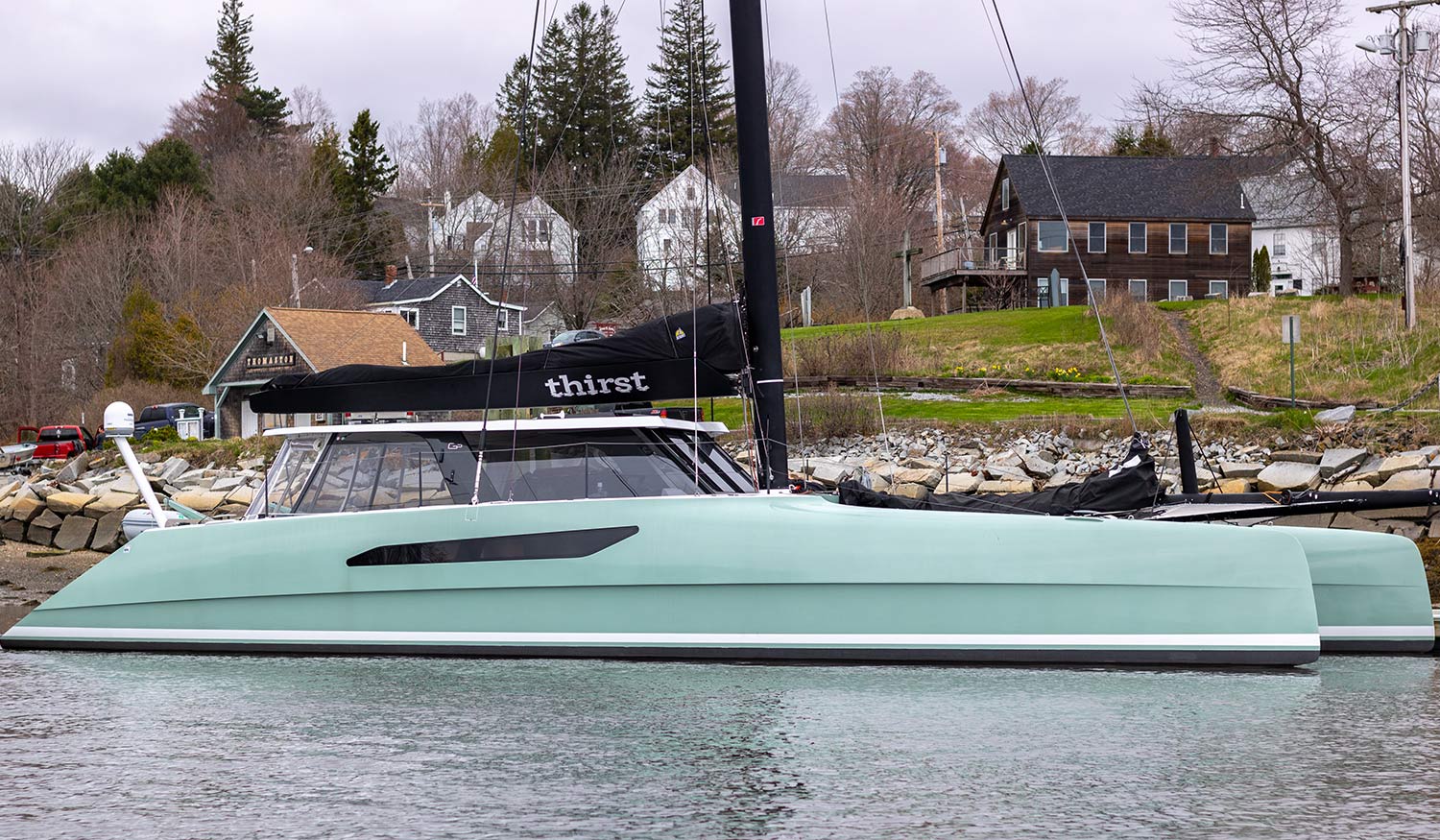 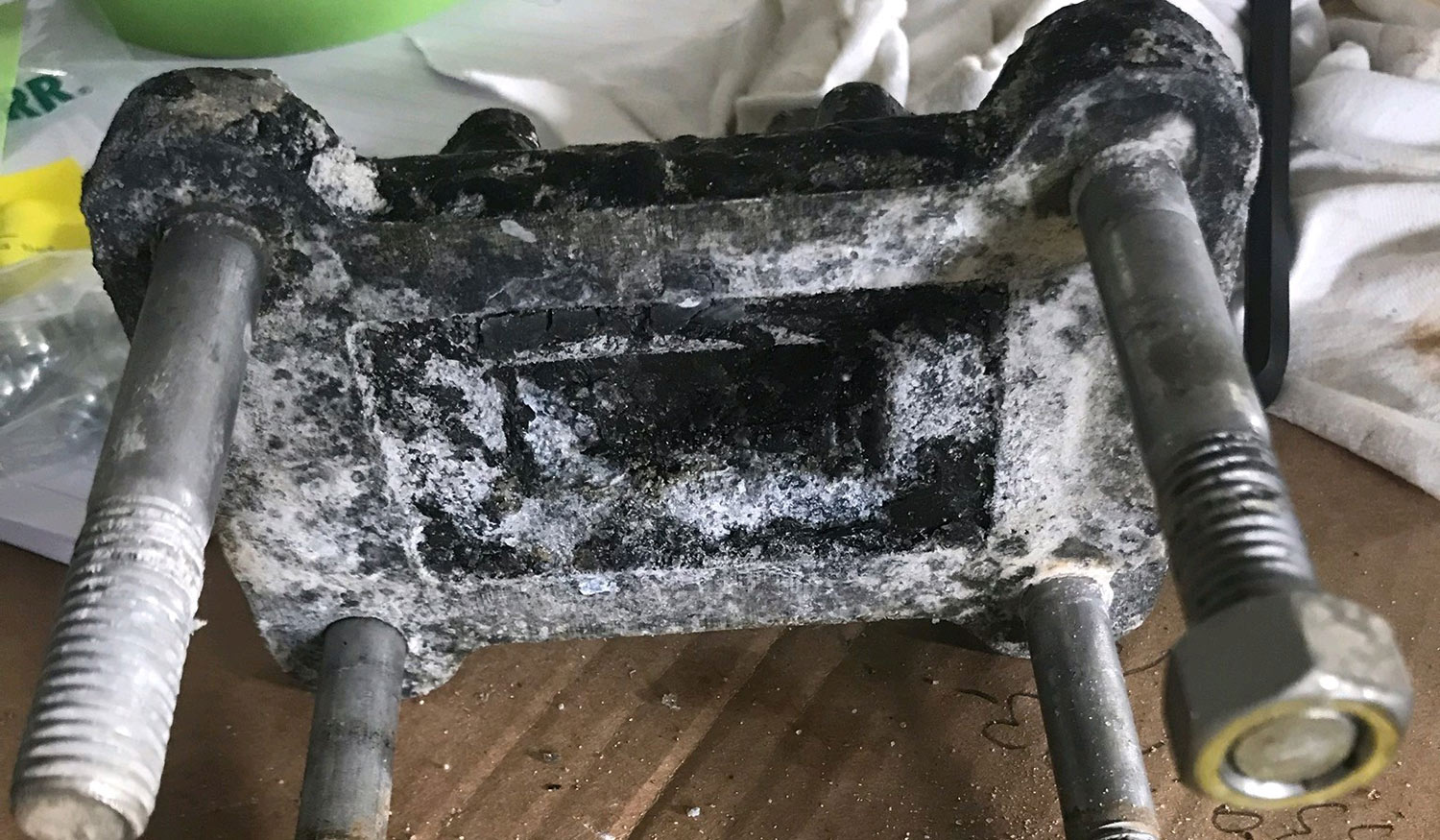 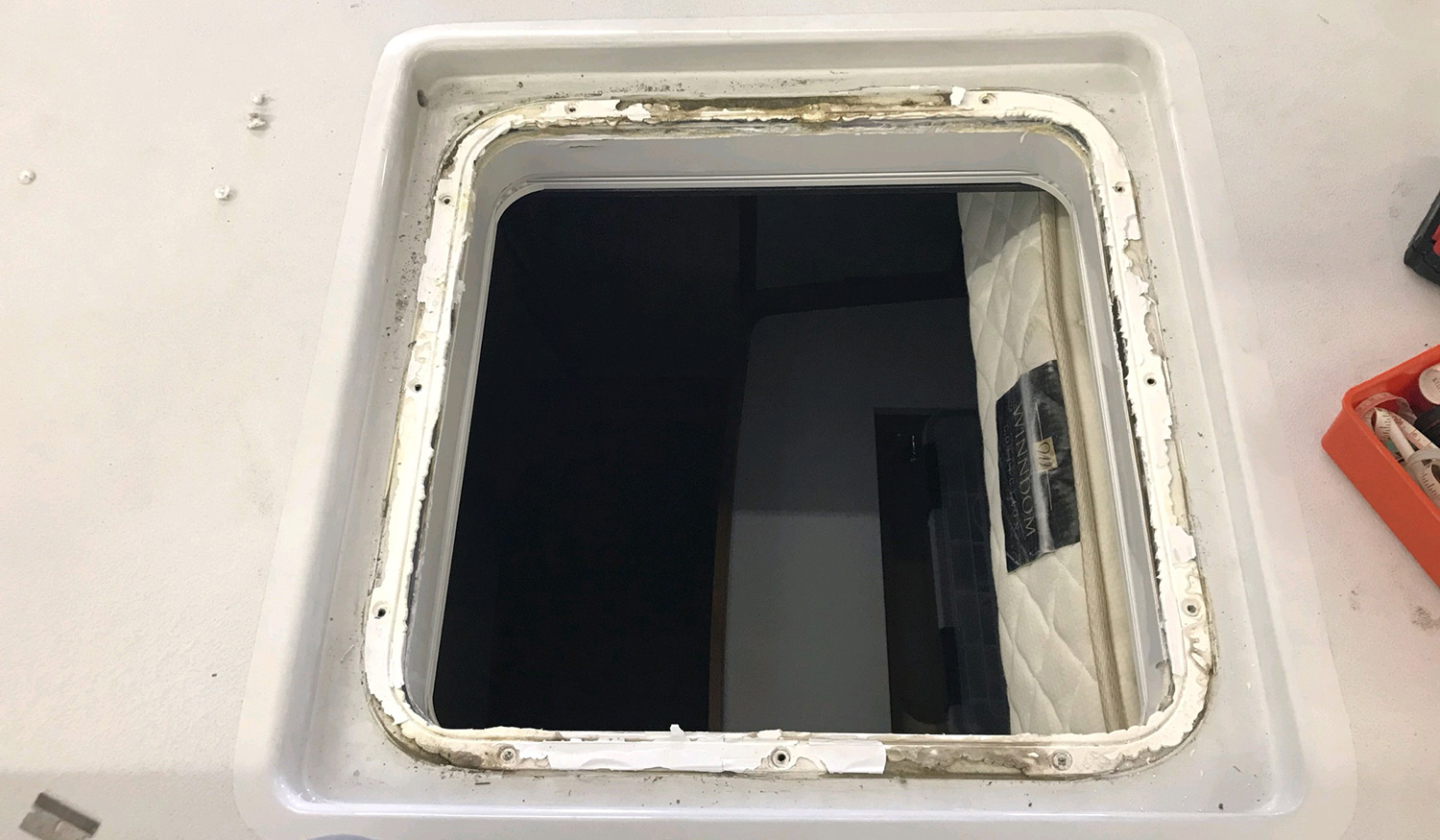 Boat owners know all too well that if rust never sleeps, the marine corrosion on their vessels never even pauses for a nap. A particularly effective example of carbon’s corrosive power arrived at Lyman-Morse’s boatbuilding and service yard in Thomaston, Maine, in 2019: A mostly-carbon Gunboat 55 named Thirst.

This owner-skippered performance catamaran came to Lyman-Morse in Thomaston for routine repairs, including a corroding hatch, after seeing duty in the Northeast and the Caribbean. The initial work list included inspecting corroded fittings, reviewing drive lines, and checking for the standard wear and tear found in a well-used vessel. Lyman-Morse’s investigations revealed serious galvanic corrosion in rudder hardware, rigging parts and other necessary fittings. Our team quickly removed, replaced, and re-engineered the compromised parts to better insulate them from destructive carbon laminates. After relaunching in Thomaston, Thirst is back to enjoying adventures along the U.S. East Coast.

Boat owners know all too well that if rust never sleeps, the marine corrosion on their vessels never even pauses for a nap. But, less familiar to mariners is the hard science of dissimilar metals research and galvanic corrosion. Here, researchers explore the corrosion-causing flow of electrons from one material to another. Place aluminum and zinc in the same bath of salty water, and it’s the zinc that usually melts away. Drop in some brass, and now it’s the aluminum’s turn to disappear. Gold eats silver. Palladium tanks tin. Corrosion research is a deep area of study at places like the U.S. Department of Defense.

But if there’s a sitting monarch of the marine material world, it must be graphite. Graphite has the near magical power to corrode pretty much any other nearby material on a boat. Particularly aggressive is the graphite formed into the carbon fiber found in hulls, spars, and fittings of many modern performance sailing vessels.

“This boat came in for a reinstall of a corroding aluminum deck hatch, among other relatively minor work,” says Dennis Gunderson, service manager at Lyman-Morse in Thomaston, Maine. But Gunderson had deep experience with maintaining exotic performance composites as a project manager on various high-end racing programs, including a recent America’s Cup campaign.

He knew that on a carbon boat like Thirst, even a simple corroded deck hatch could signal deeper problems. “Since carbon is the most noble of materials, we started to inspect for corrosion in other critical fittings,”  said Gunderson. “Very quickly we found that other areas were being eaten up by the carbon fiber.”

Gunderson says that Lyman-Morse has decades of experience in both building and servicing advanced composites like carbon fiber. Over the years, the company has developed a wide variety of insulating solutions to protect other materials, like stainless steel and aluminum, from carbon-induced corrosion.

Gunderson relies mostly on a family of high-pressure fiberglass laminated barriers, usually branded as G-10. In Thirst’s case, Gunderson’s team carefully crafted G-10 structures between the more noble carbon fiber found in the deck housing and transom, and the more reactive materials found in nearby hatches and rudder fittings.

His work-in-progress photos reveal that even severely corroded elements can be reliably repaired and upgraded with proper maintenance.

“You want to make inspecting of critical hardware part of any regular maintenance checklist,” said Gunderson. “But especially so on a performance composite vessel. Once we catch the issue, it’s reasonably straightforward to fix it.” 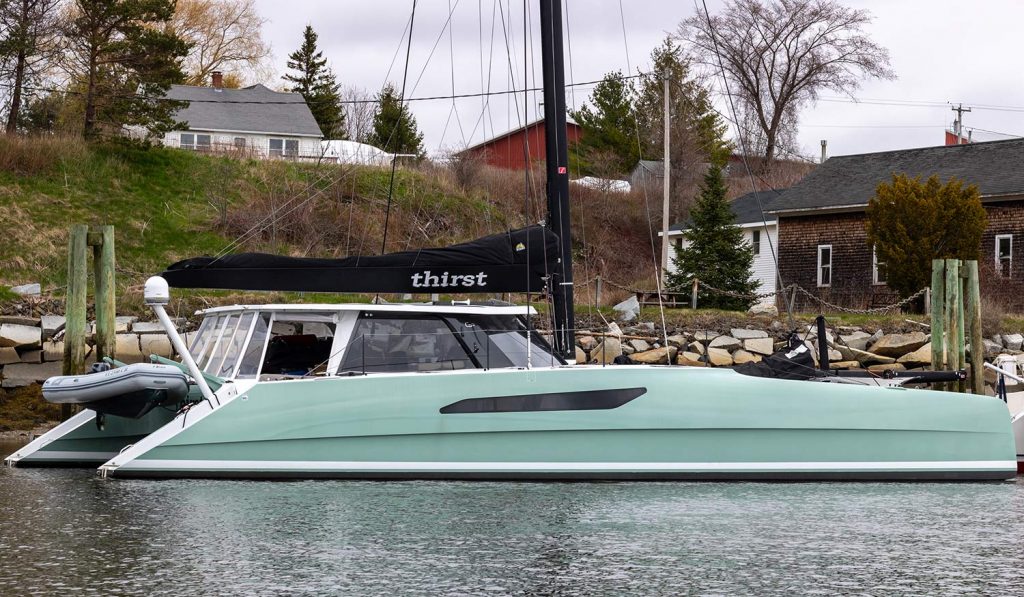 Thirst weighs in at just 27,500 lbs, light load. That’s essentially a third of the weight of traditional fiberglass vessels. Thirst came to Lyman-Morse for basic winter maintenance, after seeing duty in the Northeast and the Caribbean. The work included inspecting corroded fittings, reviewing drive lines, and checking for the standard wear and tear found in a well-used vessel sailed by an experienced owner operator. 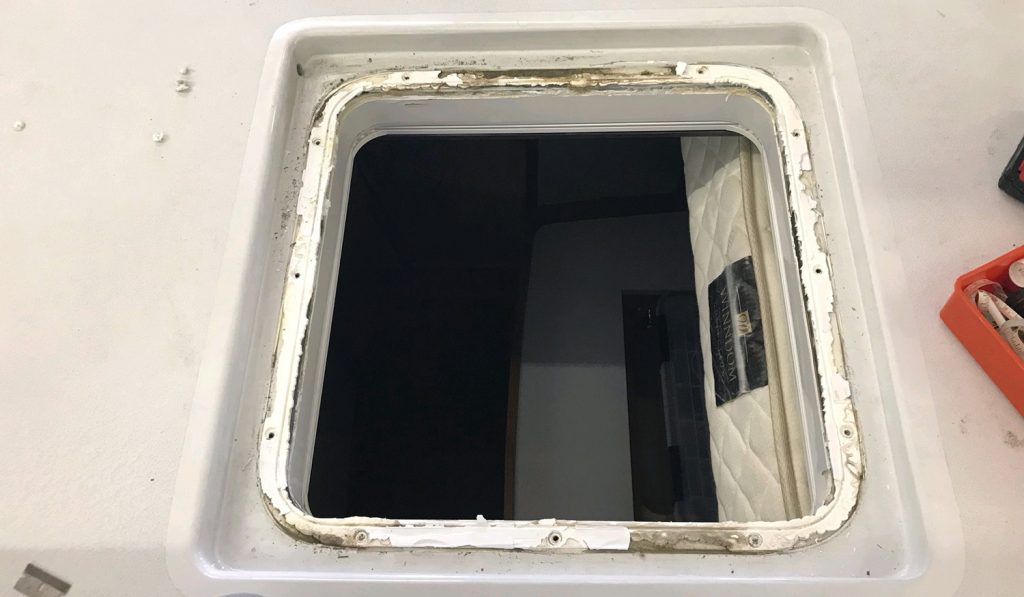 The corrosion mitigation phase of the project began on the hatch frame. Immediately, it was clear that the surrounding carbon deck was eating deeply into the aluminum housing. Note how on the right side of the hatch, the entire frame has essentially vanished.

This four-bolt fitting is custom-made by Gunboat to keep the top bearing of each rudder firmly attached to the high-performance hull. These proprietary bearings are wider, beefier, and more durable than those found on most boats. Performance multihulls require vigilant maintenance of such critical fittings. 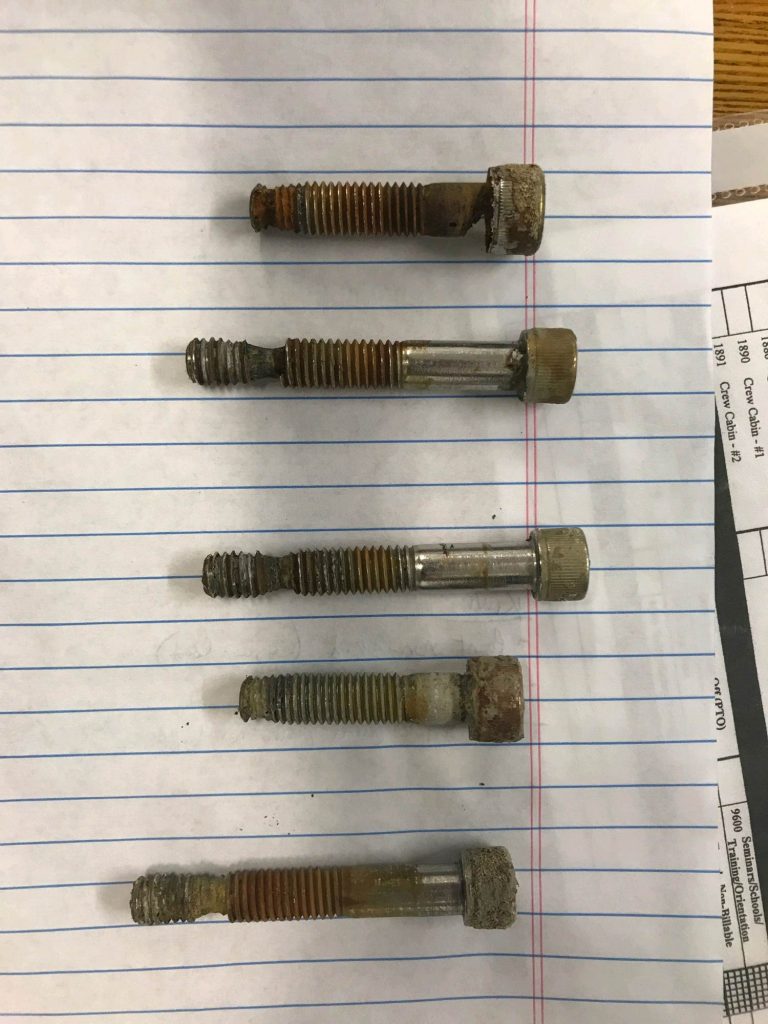 Further inspection revealed more significant damage to the bolts that hold the lower bearings in place on Thirst. Here the fasteners are laid out to compare damage. 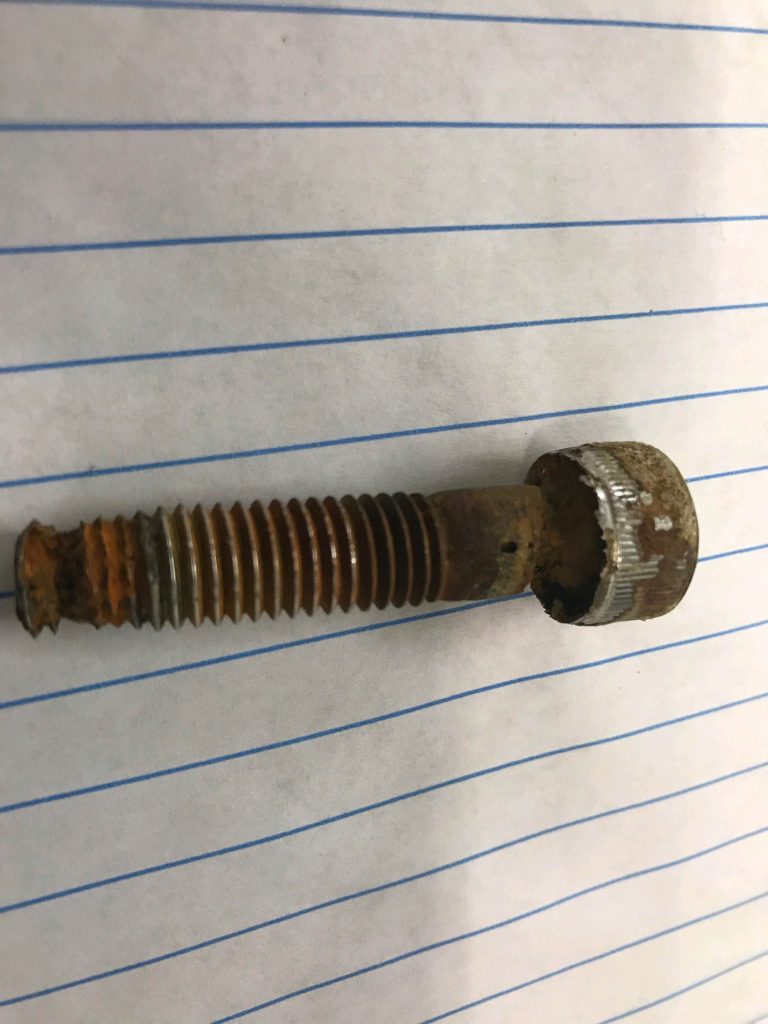 Closer examination of the corroded bearing bolts shows how dramatic the damage can be. The load-bearing sections on both the top and bottom of the fitting are on their way to failure. What’s more remarkable is this bolt was probably no more than two years old.

This owner-skippered performance catamaran came to Lyman-Morse in Thomaston for routine repairs, including a corroding hatch. A front quarter view shows the powerful hull forms, that are kept extremely light through extensive use of carbon throughout.